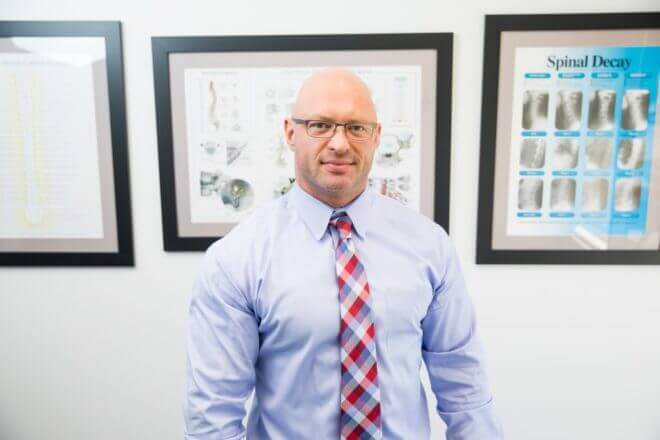 A sense of adventure coupled with a strong belief in the benefits of Chiropractic care inspired Dr. Parliament to volunteer his professional time in a disadvantaged country. During his studies at Palmer College of Chiropractic, Dr. Parliament was selected to participate in the International Clinic Abroad Program. This program awarded him the privilege of traveling to Budapest, Hungary, where he and fellow classmates graciously contributed the gift of Chiropractic care to the Hungarian people. Dr. Parliament valued the experience, not only for the diversity of patients treated but also for the opportunity to witness firsthand the life-altering impact Chiropractic care has upon people.

When asked why he became a chiropractor, Dr. Parliament explains that “An injury during a high school wrestling match left my low back feeling very sore and weak. I wanted conservative healthcare that would address the source of the problem and not just cover up the symptoms. This low back condition prompted me to seek Chiropractic care because it presented a long-term health solution without the use of drugs or surgery. The benefits received from this care instilled within me a strong desire to help others like myself.”

Participation in athletics has always been a great pleasure for Dr. Parliament. In baseball, he was selected to play in the South Dakota State Legion All-Star game, and he represented Palmer College at the 1999 and 2000 Chiropractic Games. During his undergraduate studies, he received multiple scholarships to wrestle on the Minnesota Southwest State team. While attending Palmer College of Chiropractic, Dr. Parliament worked as an Assistant Wrestling Coach for Bettendorf High School where he helped students with motivation, conditioning, and technique, as well as being a role model and friend.

Dr. Parliament’s passion for athletics has made a mark upon his style of Chiropractic care. He particularly enjoys helping patients with sports-related injuries, concentrating upon the Chiropractic Adjustment and rehabilitation of not only the spine but also extremities which include the shoulders, wrists, knees, ankles, and feet.

Dr. Parliament is a down-to-earth clinician who enjoys spending time with his patients. He strongly feels that people should never be forced to learn to live with their pain when other clinical options exist. Dr. Parliament is dedicated to finding, correcting and preventing the cause of neuro-spinal conditions (subluxation complex), and other joint and health-related disorders in each of his patients through the benefit of Chiropractic care. He is also committed to promptly refer those patients requiring medical or other appropriate professional care.

David Parliament’s Practice has been recognized as one of the top Anchorage Chiropractic practices.
Verified by Opencare.com

Dr. Ryan Fordt is a graduate of Life University, which is located just north of Atlanta, Georgia. He graduated in 2015, and as a graduate of the nation’s Best Chiropractic College, he was well-suited to begin his professional life while continuing his education. Dr. Fordt is certified by the National Board of Chiropractic Examiners, Board Certified in Physiotherapy and is a member of the International Chiropractic Pediatric Association. He did his undergraduate training at Northern Michigan University in Marquette Michigan, where he studied Exercise Science and Physiology.

With an energetic and go-getter personality, Dr. Fordt believes it is his responsibility to his patients to be well-trained and sufficient in various techniques of adjusting to suit each individual’s needs. This is why he was certified in the Thompson Drop Table technique by Dr. Robert Jackson in 2013. Dr. Fordt used his training to become the President of Life University’s Thompson Club during his senior year studies.

During his studies, Dr. Fordt discovered how important it is for children to see a chiropractor as well. After graduation, his attention turned towards the International Chiropractic Pediatric Association to further his training. When asked by parents if their kids should see a chiropractor, Dr. Fordt stated “When you were growing up think about all the times you fell, ran into something, or had a major accident. These traumas all have the potential to cause issues in your spinal column (subluxation complex) and if left undetected can lead to issues later in life.” Because adult spines are very different from children’s spines, Dr. Fordt took the extra two years after chiropractic school to join the ICPA and become proficient in taking care of children and pregnant women.

Chiropractic medicine changed Dr. Fordt’s life after a football injury caused him to have consistent lower back pain. Knowing he couldn’t live a life full of pain, Dr. Fordt sought out chiropractic care. Dr. Fordt adamantly says that chiropractic care “changed my life, showing me that you don’t have to live life in pain no matter your age, and there are other ways to relieve that pain besides drugs”.

By treating everyone as an individual and taking the time to understand each patient’s condition, Dr. Fordt is able to find, correct, and prevent the cause of their neuro-spinal condition (subluxation complex) and create an effective plan for their individual treatment.

When not in the office, you can find Dr. Fordt doing something active outside. He has a true passion for the outdoors and he enjoys hiking, mountain biking, snowboarding, cross-country skiing, fishing, hunting, and many more activities. The outdoor lifestyle is something that helped draw him to Anchorage, Alaska where he has incredibly easy access to some of the most beautiful country to make every day an adventure.